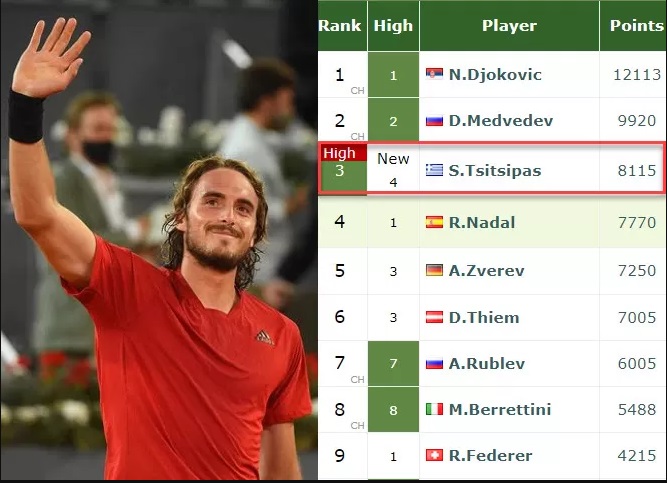 ATP Rankings: Stefanos Tsitsipas jumps to 3rd spot ahead of US Open- check top 10 rankings: Jannik Sinner of Italy jumped nine spots to a career-high No. 15 in the ATP Rankings after he captured the Citi Open title in Washington on Sunday.

The 19-year-old is the youngest ATP 500 champion since the category was created in 2009, with no other teen lifting a trophy at this level, as per ATPTour.com. The three-time tour-level titlist defeated American Mackenzie McDonald 7-5, 4-6, 7-5. Despite not playing last week, Stefanos Tsitsipas, moved one place to a career-high No. 3. The Greek has won two tour-level titles this year at the Monte-Carlo Masters and the Open Parc Auvergne-Rhone-Alpes Lyon, while also advancing to his first Grand Slam final at Roland Garros in June. The 2019 Nitto ATP Finals champion is the third seed in Toronto this week.

The 31-year-old, Kei Nishikori also moved 12 places after he reached the semi-finals in Washington. It is the first time the Japanese star has reached the last four at a tour-level event since Barcelona in 2019.

Mackenzie McDonald was the biggest gainer as he moved 43 spots to No. 64 in the ATP Rankings. The 26-year-old defeated Australian Nick Kyrgios and Nishikori in Washington to reach the final.
Related TopicsStefanos TsitsipasTennis