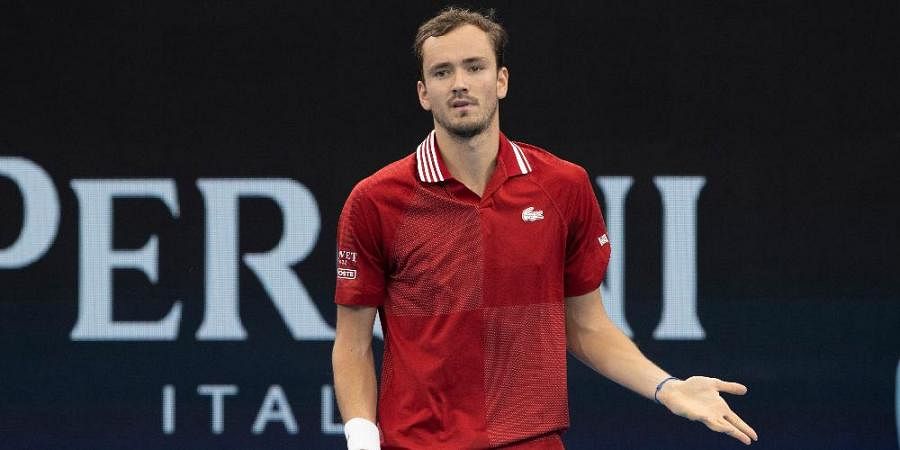 The win set them up with a last four clash against Canada after Felix Auger-Aliassime stunned German world number three Alexander Zverev 6-4, 4-6, 6-3.

Medvedev, who is set to be the top seed at this month’s Australian Open with Novak Djokovic facing deportation over a visa issue, was dominant in the first set against Berrettini.

But the gritty big-serving Italian battled back to win a second set tie-break before the Russian got a crucial break in game three of the third set to carve out a 6-2, 6-7 (5-7), 6-4 win.

Medvedev played just five doubles matches in 2021, but has fronted up for three so far in Sydney and partnered with Safiullin again to keep their unbeaten record intact, digging deep to beat Berrettini and Sinner 5-7, 6-4, 10-5.

“What we did amazing today was we were in a tough position at one point, and every change, every shot we had to make we tried to discuss it, and it worked,” said Medvedev of the doubles.

“Roman started playing unbelievable and we had some crazy rallies, it was amazing.”

Medvedev and Berrettini met in singles for the first time since the 2021 ATP Cup final, when the Russian ran out a 6-4, 6-2 winner to seal the trophy for his team, and he again had the edge.

Known on tour as “Deep Court Daniil”, he took up his customary position near the back wall to return serve, breaking twice in the first set.

The match turned in the third set when Medvedev’s service return earned him three break points to establish a 2-1 lead. He held serve for 3-1 and there was no way back for the Italian.

“I made some bad decisions in the second set so I tried to learn from that in the third. I served well throughout the match and that helped me,” added Medvedev, who led the ATP Tour with 63 match wins last year.

They will meet Canada for a place in the final against either the Roberto Bautista Agut-led Spain or Hubert Hurkacz’s Poland.

Britain had earlier kept their hopes of making the last four alive by toppling the United States 2-1, leaving their fate in the hands of Germany and Canada.

If Germany had won then Britain would have become the last semi-finalist, only for Canada to shatter their dreams.

Denis Shapovalov boosted their chances by overcoming Germany’s Jan-Lennard Struff 7-6 (7/5), 4-6, 6-3, dictating with his powerful groundstrokes, to put the pressure on 11th-ranked Auger-Aliassime.

He shouldered it well for a deserved victory, recovering from squandering four break points at 3-3 in the second set to aggressively bounce back.

“I played a good match, he’s a great player,” Auger-Aliassime said after clocking the first top-five win of his career.

“He’s beaten me a couple of times before so happy I was able to get the job done, especially for the team.”