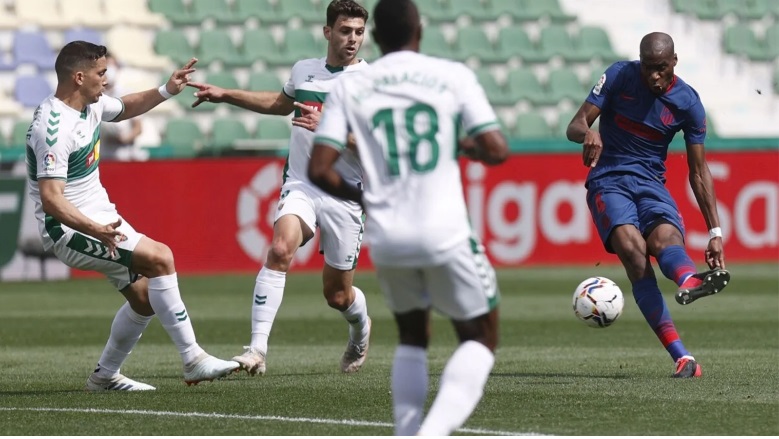 Other than Llorente’s first-half goal, Atlético relied on its defense and almost paid for it in the final moments when Llorente used his arm to disrupt a cross into the box.

Atlético Madrid needed a goal by Marcos Llorente and a penalty miss by Elche in injury time to grind out a 1-0 win and open a five-point advantage at the top of the Spanish league on Saturday.

Other than Llorente’s first-half goal, Atlético relied on its defense and almost paid for it in the final moments when Llorente used his arm to disrupt a cross into the box.

But Diego Simeone’s side dodged another costly stumble away from home when Elche’s Fidel Chaves fired the resulting penalty kick off the left post.

“It was an obligation to win today,” Llorente said. “These three points give us a lot of strength for what’s ahead. Winning is always a boost to the team’s spirit and confidence, and even more so now that we are reaching the finale.”

Atlético’s first road victory in five trips let it open a five-point gap over Real Madrid and Barcelona, with Sevilla just one more point back.

Then comes next weekend’s pair of head-to-head clashes between the challengers: Atlético visits Barcelona on May 8, and the next day Madrid hosts Sevilla. After that, there will only be three rounds left.

Llorente scored in a match dominated by the defense in the 24th when Yannick Carrasco dribbled to the end-line and assisted the midfielder in the heart of the box. Llorente’s shot took a deflection off a defender before landing in the net.

Ahead in the score, Atlético’s defense clamped down until the final minutes when the relegation-threatened Elche finally threatened Jan Oblak’s goal only to come up empty.

Atlético had once looked ready to run away to its first title since 2014 after it opened up double-digit leads over Madrid and Barcelona. But it has squandered the advantage. It has seven wins in the last 15 rounds, and only Granada’s shock win at Camp Nou on Thursday ensured it did not lose the lead to Barcelona.

And even though his side is still not playing like a champion-in-the-making, Simeone wants to transmit the message that the red-and-whites are still in command.

“I focus on the positive things we did. The negative things don’t help,” Simeone said after the win. “Now is not the time to think. This is the moment for action. We controlled the first 75 minutes, but when you don’t put it away you know what can happen, the danger that two points that can prove decisive could slip away.”

Kike García scored a hat trick to help last-placed Eibar beat Alavés 3-0 and give it the hope of avoiding relegation.

“This is a boost of morale, maybe not enough to save us, but enough for us to be brave,” García said.

OUT OF THE DROP

Huesca’s Sandro Ramírez scored from a free-kick that went in off a Real Sociedad defender to snatch an 88th-minute winner. The 1-0 victory lifted Huesca out of the drop zone

I Will do anything to outclass Manchester City, even if I have to die on the pitch: Neymar
Delhi football mourns death of Hindustan FC chief DK Bose