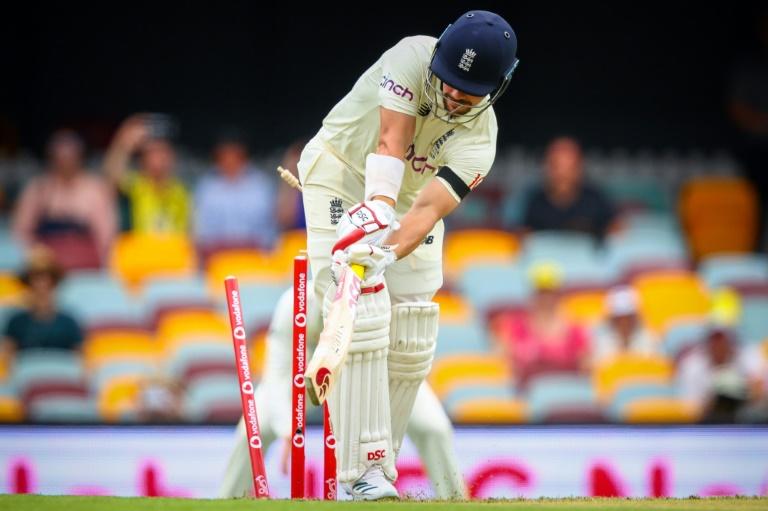 Pat Cummins took five wickets in a scintillating start to his captaincy as Australia routed England for 147 on the opening day of the Ashes at the Gabba on Wednesday.

After England skipper Joe Root won the toss and opted to bat, the Australian pace bowling trio of Cummins, Mitchell Starc and Josh Hazlewood ran riot to bundle the tourists out in just 50.1 overs.

Cummins, in his first game as Test captain since taking over from Tim Paine, claimed 5-38, while Starc took 2-35 and Hazlewood 2-42 as the English batters failed to adapt to the bounce and movement of a Gabba green top.

England made a disastrous start to the series when they lost Rory Burns to the first ball of the match, Starc bowling the left-hander around his legs.

Dawid Malan, who scored six, and Root, for a duck, quickly followed as a shell-shocked England slumped to 11-3.

“It was a dream start really — it wasn’t a bad toss to lose and I thought we all bowled really well and did our jobs,” Cummins said.

“To keep them to 150 was a tremendous start. I was really proud of how consistent and composed everyone was.

“Personally, it was nice to get a couple of wickets at the end to make it a five-for — it was just a really good start.”

Cummins chimed in to remove the dangerous Ben Stokes for five and leave England struggling on 59-4 at lunch, on a hot and humid Brisbane morning.

It was only a momentary respite. In the first over after the interval Haseeb Hameed edged Cummins to Steve Smith at second slip to leave England teetering at 60-5.

Jos Buttler came out and launched a fightback with a glittering array of attacking shots to put the Australian attack on the back foot for the first time.

However, with the score on 112, Buttler — who had reached 39 — feathered a catch to debutant wicketkeeper Alex Carey.

Six runs later, Ollie Pope was caught at deep fine leg for 35 to give Cameron Green his first Test wicket.

England’s flimsy challenge was all but over, despite some late hitting from Chris Woakes, who was last man out for 21 as Cummins mopped up the tail.

Pope said England had failed to adapt to the conditions swiftly enough.

“They bowled very well and the steepness of the bounce you get at the Gabba — the pitch felt quite soft and I think that tennis-ball bounce probably dragged a few shots that you don’t have to play,” Pope said.

“It’s probably the adjustments you have to make on a day-one Gabba pitch that we didn’t make quickly enough.”

Pope said it was imperative that England bowled at the same level as their arch-rivals when play resumes on Thursday, the day’s action having ended prematurely after heavy rain.

“I think it will quicken up and the nicks will definitely carry so if we put it in the right areas early, hopefully we can make some early inroads,” he said.

Earlier Root had taken the brave decision to bat in the bowler-friendly conditions.

Brisbane has been experiencing a wet start to the summer, washing out most of the tourists’ scheduled warm-up games.

Having had little chance to become acclimatised to the conditions, England’s top order struggled badly with the pace and movement of the Australian attack.

The crowd of just over 30,000 were barely settled in their seats when Starc clean-bowled Burns behind the left-hander’s legs with a full, swinging delivery that should have been defended.

It was only the second time in Ashes history that a wicket had fallen on the first ball of the series. The only previous victim was England’s Stan Worthington in 1936, also in Brisbane.

They instead opted for a seam attack of Woakes, Mark Wood and Ollie Robinson, bolstered by Stokes and left-arm spinner Jack Leach.

“It was a little surprising — I thought either one of those two would play in every game, if not both of them,” Cummins said.