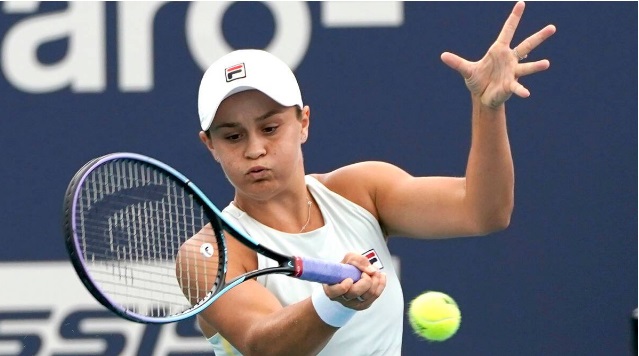 Top-ranked Ash Barty moved a step closer to her first clay title since the 2019 French Open after she came back from a break down in the deciding set to beat Karolina Pliskova 2-6, 6-1, 7-5 in the Porsche Grand Prix quarterfinals on Friday.

Pliskova served for the match at 5-4 in the decider but Barty earned five breakpoints and converted the last. The Australian then held to love and broke Pliskova again to win when the Czech sent a forehand long.

“That was an incredible match,” Barty said. “Just a really, really good battle.”

Pliskova’s late slip meant she still has not won three consecutive matches since she reached the Rome final in September. Barty is into her first clay-court semifinals this year after a quarterfinal exit in Charleston.

Barty will play Elina Svitolina in the semifinals. The fourth-seeded Ukrainian fought back and saved two match points before overcoming Petra Kvitova 6-7 (4), 7-5, 6-2 in their quarterfinal.

The second-seeded Simona Halep had less trouble reaching the other semifinal. Halep defeated Ekaterina Alexandrova 6-1, 6-4 and will next face Aryna Sabalenka.

Djokovic hopes the COVID-19 vaccine will not become compulsory for players.
Nadal beats Carreno, to meet Tsitsipas in Barcelona final.