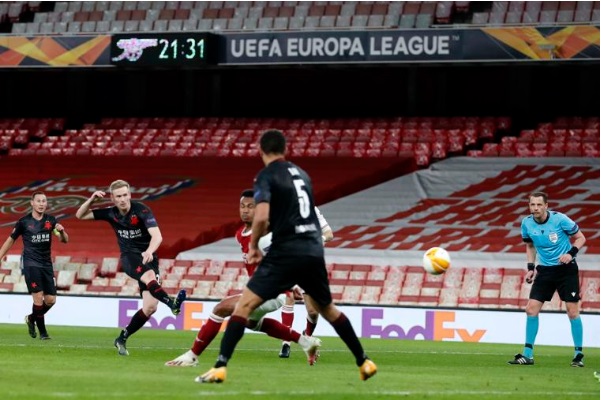 Arsenal conceded in injury time to draw 1-1 with Slavia Prague in the first leg of their Europa League quarterfinal on Thursday, while Manchester United won 2-0 in Granada.

Bruno Fernandes’ last-minute penalty put United in a commanding position to reach the semifinals after Marcus Rashford had given the visitors the lead in Spain.

Arsenal paid the price for a lack of concentration after failing to defend Nicolas Pépé’s 86th-minute opener.

Goalkeeper Bernd Leno made a fine save to deny Lukáš Provod in injury time, but couldn’t stop Tomáš Holeš from grabbing Prague’s equalizer from the resultant corner.

Roma also came from behind to win 2-1 at Ajax, and Villarreal won 1-0 at Dinamo Zagreb.

Arsenal had worked hard for Pépé’s opener. Brazilian winger Willian struck the post with a free-kick early in the second half, and Alexandre Lacazette should have scored later when he only had the goalkeeper to beat. The French striker opted to lift the ball only to see it crash back off the crossbar.

The visitors missed chances of their own before Pépé finally broke the deadlock with a chip over the outrushing Ondřej Kolář in the Slavia goal.

Holeš headed in Prague’s equalizer in the fourth minute of injury time.

United emerged with a commanding advantage despite a tough game in Andalusia.

Rashford scored with a cool finish past Granada goalkeeper Rui Silva in the 31st. The buildup was simple. United goalkeeper David de Gea passed to defender Victor Lindelöf, who sent a long ball over the home side’s defense for Rashford to latch onto with a brilliant first touch before he fired past Silva. It was the England striker’s 20th goal of the season in all competitions.

Granada responded before the break with Yangel Herrera striking the post, Roberto Soldado going close, and then Kenedy testing De Gea after a corner. The home side maintained its pressure after the interval when again Kenedy forced De Gea into action.

Harry Maguire became the third United player to be ruled out of the second leg through suspension when he was booked for a foul on Soldado in the 72nd. Luke Shaw and Scott McTominay were booked earlier, as was Granada defender Domingos Duarte, who will also miss next week’s game.

Yan Brice was booked after conceding the penalty on Fernandes, who’d had a quiet game. Rui Silva almost saved the spot-kick but Fernandes’s effort squirmed through.

Ajax, like Arsenal, was to rue a missed opportunity.

Davy Klaassen capitalized on hesitant defending to score the home team’s opener in the 39th. The Dutch midfielder cut out Amadou Diawara’s weak back pass and exchanged passes with Dušan Tadić before scoring as Roma defenders Roger Ibañez and Gianluca Mancini backed off.

Tadić should have made it 2-0 early in the second half, but Roma goalkeeper Pau López saved his penalty.

Lorenzo Pellegrini then equalized with a free-kick that young goalkeeper Kjell Scherpen fumbled over the line in the 57th, and Ibañez atoned for his lackluster defensive display with the winner in the 87th. Ibañez took Klaassen’s attempted clearance from a corner on his chest before firing a volley in under the crossbar.

The second legs are to be played next Thursday.