Arsenal fans protest against the owner for Super League debacle. 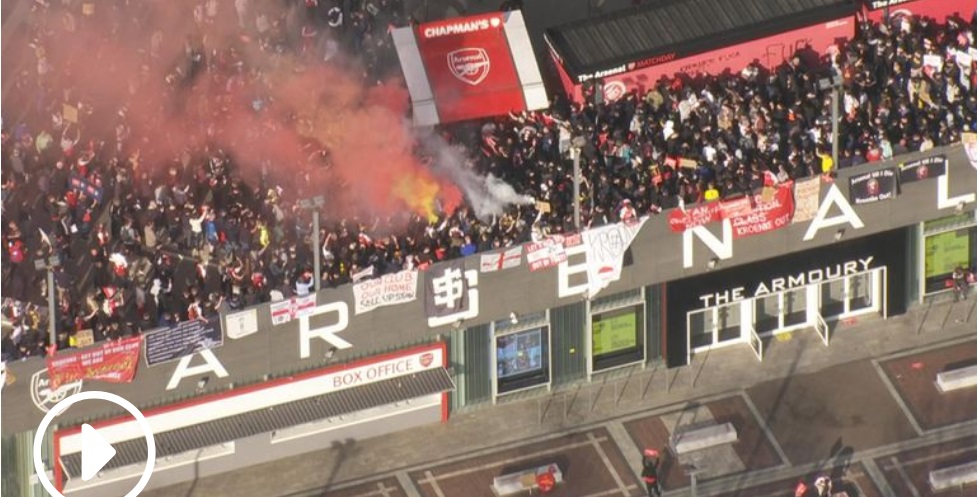 Fans gathered on the stadium’s concourse more than two hours before kickoff, banging metal screens above the main box office, lighting flares, setting off fireworks, blaring airhorns, and chanting “We want Kroenke out,” and “We want our Arsenal back.”

Several hundred Arsenal fans protested outside Emirates Stadium at the English Premier League match against Everton on Friday to call for owner Stan Kroenke to leave the club for joining the Super League.

Fans gathered on the stadium’s concourse more than two hours before kickoff, banging metal screens above the main box office, lighting flares, setting off fireworks, blaring airhorns, and chanting “We want Kroenke out,” and “We want our Arsenal back.”

They also hung banners over the edge of the concourse including ones that read, “Arsenal till I die. Kroenke out,” and “Our club our home. Sell up, Stan.”

After gathering on the concourse, the fans marched downstairs to the box office and team store to continue their noisy demonstration. One fan climbed on top of the box office awning and waved banners and flags, riling up the hundreds of fans gathered in front of him and leading them in chants against Arsenal’s ownership.

The protest was still in full voice and could be heard inside the stadium as the teams took to the pitch to warm up and after the match kicked off as a police helicopter circled above the stadium. Officers didn’t attempt to move in to break up the protest amid the coronavirus pandemic.

Fan anger has been brewing since Arsenal and five other Premier League clubs announced they would join a breakaway Super League last Sunday. And it hasn’t subsided even after Arsenal quit the 12-team Super League project on Tuesday night in the face of a growing public backlash, and apologized to fans.

Kroenke’s son, Josh Kroenke, joined an Arsenal fans forum on Thursday, and supporters voiced their disdain at the decision to form a Super League without consulting them. Kroenke told them the family has “no intention” of selling the club.

Just before kickoff, Spotify founder and chief executive Daniel Ek said he would be interested in buying Arsenal from Kroenke Sports and Entertainment.

“As a kid growing up, I’ve cheered for @Arsenal as long as I can remember. If KSE would like to sell Arsenal I’d be happy to throw my hat in the ring,” he tweeted.

Both teams’ buses arrived earlier than normal on Friday before the bulk of the protesters arrived outside the stadium in order to ensure the match would go ahead. On Tuesday night, kickoff in the Chelsea-Brighton match was delayed by 15 minutes after Chelsea’s bus was slowed getting into Stamford Bridge because of protests.

Friday’s protest appeared to be the biggest yet, with fans basking in the sunshine outside Emirates Stadium, many with beer cans in hand. It followed the protest at Chelsea and one outside Elland Road on Monday before Leeds’ match with Liverpool, another club that aimed to join the Super League.

The project crumbled when all six English clubs withdrew on Tuesday. The Super League was proposed to be mainly closed, and a split from the Champions League where qualification is determined annually from domestic competitions.

Arsenal manager Mikel Arteta said after losing to Everton 1-0 that he wasn’t sure if the protests had an effect on his players. He hopes that trust can be rebuilt between the club and the supporters.

“My biggest challenge is to get them (the fans) inside the stadium as quickly as possible and show that passion, and that togetherness and unity with the team because the team is desperate for them to be close to us,” Arteta said.

“We have a really young team that has to experience the emotion and the security and the trust that comes when you feel your people really behind you and that’s something that you have to experience to understand the difference it makes, rather than playing at home with none of them,” he said.