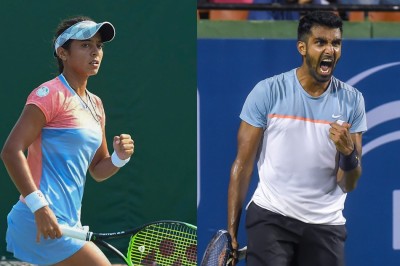 This year we have nominated Ankita and Prajnesh for Arjuna while the names of very respected Balram sir and Enrico Piperno have been sent for lifetime achievement honor, Dhyanchand,” an All Indian Tennis Association (AITA) official told news agency PTI.

Ankita is currently the highest-ranked singles (182) and doubles (95) female player from India. She is set to make her Olympics debut in Tokyo next month.

Ankita and Prajnesh both had won the singles bronze medals at the 2018 Asian Games held in Jakarta and Palembang.

Prajnesh is one of the most mature players in the current Indian generation. Had he not lost five crucial years to knee stress fractures, his career would have been an altogether different story.

The 31-year-old left-hander from Chennai, ranked 148 on the ATP charts, has played five Davis Cup ties for the country.

In the Lifetime achievement category, Balram Singh, who has a 50 year-long association with Indian tennis, will vie for the honor along with Piperno, who coached the Davis Cup team between 1991-2001 for 27 consecutive ties.