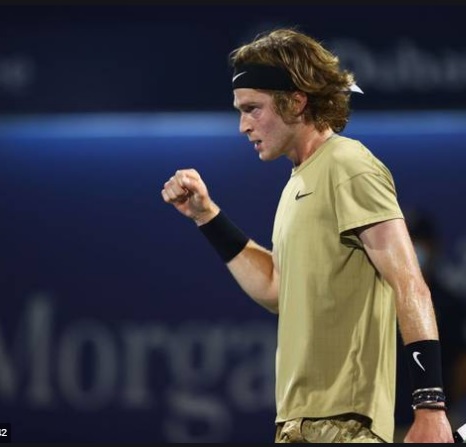 Taylor Fritz has been playing well lately, but the American had a big problem on Wednesday evening: he was playing red-hot Russian Andrey Rublev.

The second-seeded Rublev needed barely an hour to win 6-3, 6-1 against Taylor Fritz. He next faces a rematch against Marton Fucsovics, the player he beat in the Rotterdam final earlier this month.

Fucsovics won 6-1, 4-6, 6-4 against 11th-seeded Dusan Lajovic. The Hungarian has gone to three sets in all three matches in Dubai this week.

Playing his 200th tour-level match, the third-seeded Shapovalov held serve throughout a 6-4, 6-3 win over Hubert Hurkacz to set up a quarterfinal against Jeremy Chardy. If Shapovalov wins, it would be the first time this year that the 12th-ranked Canadian has won three consecutive matches. Chardy upset eighth-seeded Karen Khachanov 6-7 (3), 6-4, 6-4.

“I’m really happy that I can win in straight sets, quite confidently. I know Taylor since [the] juniors and it’s always tough to play against him, because he has a huge serve and he’s playing really fast,” Rublev said. “The first set was not even rallies because everything was serve, winner or serve, mistake, so everything was so fast.

“In these conditions, it’s tough to find the rhythm. You don’t know what’s going to happen and it’s really not easy, but I’m happy that in the end I made it.”

Most Consecutive Wins At ATP 500 Events

Rublev has now won 22 consecutive matches at ATP 500 events, moving into second place for the longest winning streak at this level since the category’s inception in 2009. The Russian has not lost at an ATP 500 tournament since Hamburg last year.

The Russian extended his winning streak at 500-level tournaments to 22 victories in a row.

Only Roger Federer has pulled off a longer stretch of wins at this level, with the Swiss amassing 28 consecutive victories at ATP 500 events between 2014 and 2016.

“I think it’s not about 500s, it just happens,” Rublev said. “I’m really happy with my performance. I’m really happy that I’m playing and showing good results and we’ll see if I can keep working this way.