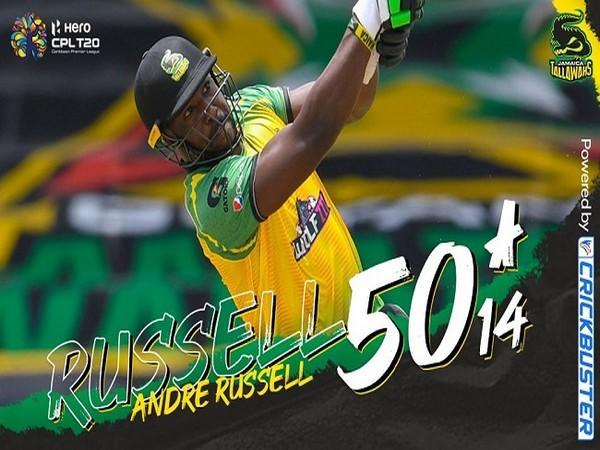 Jamaica Tallawahs’ Andre Russell bulldozed his way through Caribbean Premier League record books in a stunning assault as the allrounder scored the fastest half-century in the T20 league history on Friday. Coming in to bat in the 18th over, Russell struck an unbeaten 14-ball 50 to set the record as he powered Tallawahs to a mammoth 255/5 against St Lucia Kings at Warner Park.

Kings bowler Wahab Riaz took the brunt of the assault, finishing with figures of 0/16 from three overs. Obed McCoy did take three wickets but conceded 52 runs as well from his four overs.

In reply, Kings were bowled out for 135 in 17.3 overs with Tallawahs registering a massive 120-run win. Migael Pretorius was the pick of the bowlers taking 4/32 while Imran Khan finished with 3/7.

#Russell’s half-century off 14 deliveries is the fastest ever in CPL history. He overtook the previous record of 15-ball fifty set by JP Duminy in 2019.

#Russell blasted 49 runs in the final two overs of the innings and thus drew level for the most numbers of runs scored in the 19th and 20th over of a T20I innings. Umar Akmal is the other batter to have done the same during the National T20 Cup in 2016.

#Tallawahs crushed Kings by 120 runs which is the biggest win by run-margin in CPL history. Before them, St Kitts and Nevis Patriots held the record when they beat Tallawahs by 119 runs in 2015.

#In Tallawahs total of 255, a total of 25 runs were registered in the extras column which is the most in CPL history.

During his innings Russell struck three fours and six sixes having walked in to bat in the 18th over of the Tallawahs innings.