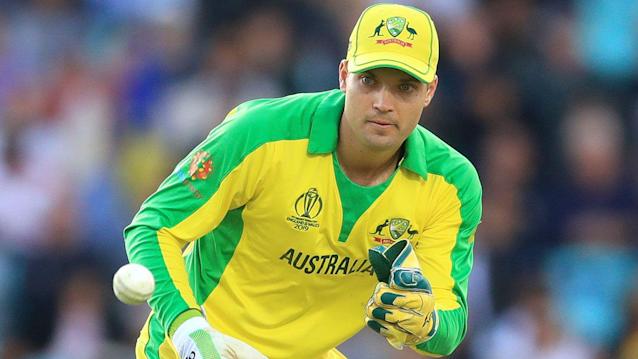 Alex Carey will captain Australia in the first one-day international against the West Indies, Cricket Australia announced Tuesday, after Aaron Finch was ruled out through injury. Finch re-aggravated a right knee injury during last week’s fifth Twenty20 against the West Indies and Cricket Australia said his availability for the second and third ODIs will be assessed on a daily basis. All three matches are being played in Barbados, starting on Wednesday. Carey, 29, will become Australia’s 26th ODI captain and takes the mantle in the absence of regular vice-captain Pat Cummins, who is sitting out the West Indies tour along with a host of senior players including Steve Smith and David Warner.

“I am deeply honoured to be able to lead the team while Aaron recovers,” said Carey, who has previously captained Australia A, the Adelaide Strikers and South Australia.

“To captain Australia is one of the greatest privileges in sport and an honour I am extremely thankful to receive. Finchy is our captain and we will welcome him back with open arms when he is fully fit, so for now I hope I can fill the role to his extremely high standards.”

Australia lost the Twenty20 series to the West Indies 4-1 and with several stars missing, Carey will lead an inexperienced ODI team in which Josh Philippe, Ben McDermott and Riley Meredith are in the mix to make their debuts.

Carey’s leadership potential was recognised at an early age, although not in cricket.

A talented junior Australian Rules footballer, he was the first official skipper of the Australian Football League’s newest team, the Greater Western Sydney Giants, albeit when they were still only part of Victoria’s Under-18 competition.

When later told he had been cut from the squad due to a lack of speed, he switched his focus to cricket and within two years had made his debut for South Australia.

The left-hander has been a mainstay of the Australian ODI side since his debut against England in 2018 and is seen as a strong contender to take over the gloves from Tim Paine when the Test keeper retires.