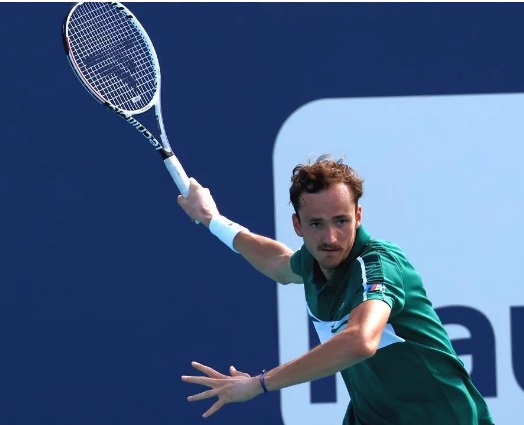 Top-seeded Daniil Medvedev defied crippling leg cramps to hobble into the fourth round of the Miami Open on Sunday with a gritty 7-6 (7/3), 6-7 (7/9), 6-4 victory over Alexei Popyrin.

World No. 2 Medvedev, increasingly hampered as the third set wore on in the heat and humidity of South Florida, nevertheless mustered the only service break of the third set on the way to a dramatic victory over 86th-ranked Popyrin of Australia.

“It’s probably one of the sweetest victories in my career,” Medvedev said on court as he limped in circles seeking relief. “It’s difficult to think about victory when you’re cramping. I should have won in two sets and there would not have been cramping.

Medvedev had certainly appeared to be cruising to the finish line when he seized a 5-2 lead in the second. Popyrin held serve for 5-3, but since Medvedev hadn’t faced a breakpoint in the match another hold seemed a mere formality.

Instead, Medvedev was shockingly broken at love in a game that featured a double fault and three superb forehand winners from Popyrin — including a stinging cross-court return on the breakpoint.

Medvedev appeared to have righted the ship, however, as Popyrin promptly fell 0-40 down in the next game.

But an ace, a service winner, and a forehand long from Medvedev erased three match points, Popyrin holding to push the set toward the tiebreaker.

Medvedev briefly got his nose in front in the decider with a point for 5-4, and he saved two set points before Popyrin leveled the match with another forehand winner on his third set point.

By then, Medvedev was feeling the strain, requesting additional electrolyte drinks and seeking what relief trainers could provide with massage on the changeovers, with no medical time out allowed for cramping.

The Russian, the runner-up to Novak Djokovic at the Australian Open in February, will face either 16th-seeded Dusan Lajovic of Serbia or American Frances Tiafoe for a place in the quarter-finals of the prestigious ATP Masters and WTA hardcourt tournament…