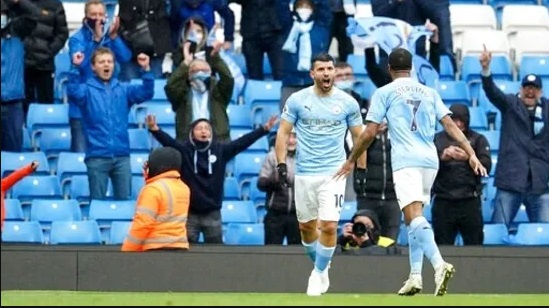 City’s record scorer, who is leaving the club following next week’s Champions League final after 10 years at the Etihad Stadium, hit a quickfire double after coming off the bench with 25 minutes remaining.

That added to earlier strikes from Kevin De Bruyne, Gabriel Jesus and Phil Foden as City showed no sign of letting up ahead of the final against Chelsea in Porto on Saturday.

Everton, which had gone into the game with a chance of qualifying for Europe, was overwhelmed on an emotional occasion that saw City presented with the Premier League trophy and fans return to the stadium.

The Merseysiders, for whom Gylfi Sigurdsson missed a penalty, slumped to 10th in the standings.

For City, it was a celebration. Not only were supporters back after 14 months away but it was their first chance to salute the champions and acknowledge their European exploits.

The fans certainly made their presence felt throughout the afternoon. Before the game, big numbers spilled into the streets as City’s team coaches made what is normally a straightforward journey from the nearby training complex to the stadium.

Only 10,000 were permitted inside the stadium but the atmosphere they generated inspired the team and few left before the post-match ceremonies, which included the club tributes to Aguero.

Everton formed a guard of honor to greet City players as they came onto the field and players from both sides then did likewise for Aguero.

Supporters would have to wait to see the Argentinian in action, however. The striker, having been troubled by a muscular injury in recent weeks, was not fit enough to play the full 90 minutes and had asked manager Pep Guardiola if he could start from the bench.