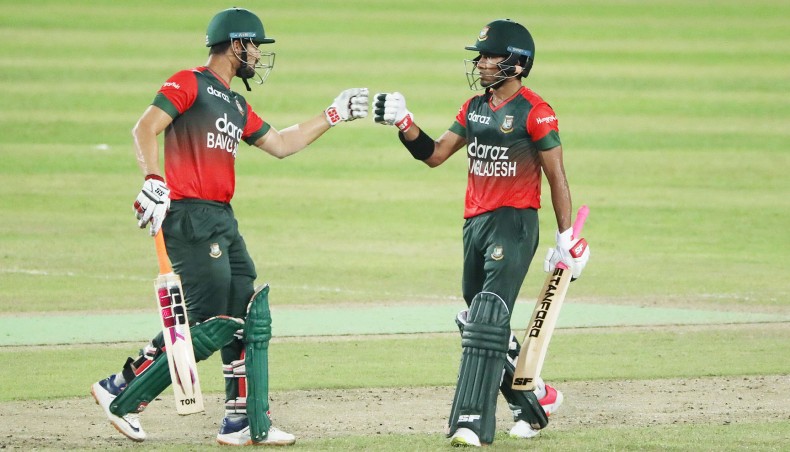 Hossain and Nurul Hasan shared an unbeaten 56-run stand to guide their side to a five-wicket win in the second match as Bangladesh take a 2-0 lead over Australia in the T20I series.

Atif struck five boundaries and a six in his unbeaten 37, which helped Bangladesh chase 122 after they were 67-5 following 11.2 overs. Wicketkeeper Nurul Hasan (22 not out) partnered Atif in rescuing the hosts after they had a rocky start in Dhaka.

Afif, who finished the game with a boundary, was unbeaten on 37 off 31, hitting five fours and one six. Hasan was on 22.

“We knew we had to stay calm, keep wickets in hand,” Afif said. “Nurul played well so there was no pressure on me either.”

Earlier, Mustafizur took 3-23 and Shoriful Islam bagged 2-27 as Bangladesh’s fast bowlers restricted Australia to 121-7, with Mitchell Marsh (45) top-scoring for the visitors after they won the toss and elected to bat.

We were in a good position today (with the ball), but unfortunately, we struggled with the bat in the last four overs,” Australia captain Matthew Wade said.

Mitchell Marsh again top-scored for Australia with 45, clobbering five fours. Australia’s batsmen dealt better with spinners after being tormented by them in the first match. Alex Carey reverse-swept Nasum Ahmed twice for four and gave the side a positive start.

Bangladesh won the opening match on Tuesday by 23 runs, claiming their maiden T20 victory over Australia. The third match will be played on Friday.